We are your repiping specialists. Call us for a free estimate to replace bad pipes. We replace Polybutylene pipes that leak as well as all other types of plumbing pipes including water pipes and sewer pipes.

Today, we use pipes made of PVC, PEX and copper. Polybutylene pipes were used in millions of homes from 1978 to 1995. There are many homes in Georgia that still have Polybutylene piping. It was billed as the piping of the future.

After a few years many installations began to fail. Without admitting the piping was defective, the manufacturers agreed to a legal settlement and ceased production. It is no longer acceptable by building codes in the U.S. and Canada. It appears that chlorine compounds in water may cause the piping to weaken and fail.

CPVC piping is widely used in water and drain piping. It is reasonable in cost and does not corrode. It may be installed using a saw and gluing the joints. PEX is plastic piping that is designed for extreme water temperatures.

Copper piping has been used for many years, and although it can corrode over time under certain water conditions, it is considered a high-quality plumbing system.

Problems can be caused by objects, such as as child's toy, being flushed down toilets. Tree roots seeking water, can enter defective sewer line joints. It is amazing how far the roots will travel.

Sewer lines installed without the proper pitch to cause the sewage to flow, can cause plugging. Older clay pipe sewer installations can be easily crushed, when a vehicle drives over soft ground. Older cast iron sewer pipes tend to last a long time.

Plugged sewers can be corrected by using a motor-driven, flexible, rotating cable with sharp like blades attached to the end. The knives are especially effective against tree roots.

Water pipes must be protected from freezing under winter conditions, especially with mobile homes or homes with unprotected crawlspaces. A thermostatically-controlled, electric heat tape may be installed on the water line and wrapped with insulation to prevent freezing.

The most common pipe problem is leaks. The pipe leak is not always easily spotted and some times special leak detection equipment is needed to find the leak.

If a re-piping job is necessary, copper piping systems or PVC or PEX piping is more commonly used today.

We offer repipe services throughout the metro Atlanta area including: 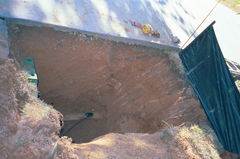 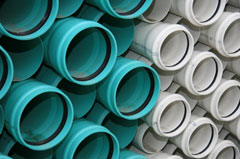 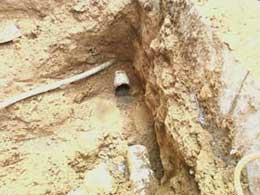